Introduction (Eng): Two red clumps (RCs) observed in the color–magnitude diagram of the Milky Way bulge are widely accepted as evidence for an X-shaped structure that originated from the bar instability. A drastically different interpretation has been suggested, however, based on the He-enhanced multiple stellar population phenomenon as is observed in globular clusters (GCs). Because these two scenarios imply very different pictures of the formation of the bulge and elliptical galaxies, understanding the origin of the double RC is of crucial importance. Here we report our discovery that the stars in the two RCs show a significant (>5.3σ) difference in CN-band strength, in stark contrast to that expected in the X-shaped bulge scenario. The difference in CN abundance and the population ratio between the two RCs are comparable to those observed in GCs between the first- and later-generation stars. Because CN-strong stars trace a population with enhanced N, Na, and He abundances that originated in GCs, this is direct evidence that the double RC is due to the multiple population phenomenon, and that a significant population of stars in the Milky Way bulge were assembled from disrupted proto-GCs. Our result also calls for the major revision of the 3D structure of the Milky Way bulge, given that the current view is based on the previous interpretation of the double RC phenomenon. 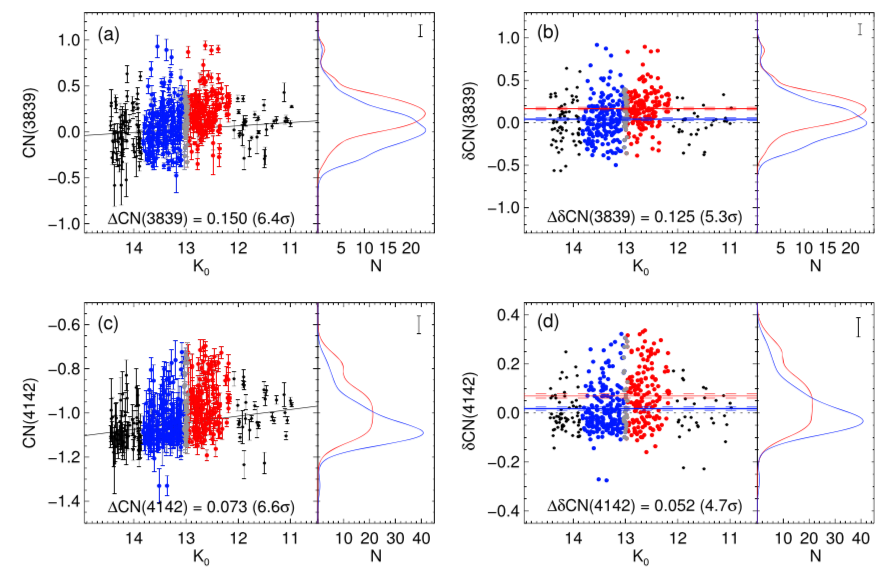 이전글
Evidence for the existence of abundant intracluster light at z= 1.24