Recent investigations of the double red clump in the color–magnitude diagram of the Milky Way bulge cast serious doubts on the structure and formation origin of the outer bulge. Unlike previous interpretation based on anX-shaped bulge, stellar evolution models and CN-band observations have suggested that this feature is another manifestation of the multiple stellar population phenomenon observed in globular clusters (GCs). This new scenario requires a significant fraction of the outer bulge stars with chemical patterns uniquely observed in GCs.Here we show from homogeneous high-quality spectroscopic data that the red giant branch stars in the outer bulge(>5°.5 from the Galactic center) are clearly divided into two groups according to Na abundance in the [Na/Fe]−[Fe/H] plane. The Na-rich stars are also enhanced in Al, while the differences in O and Mg are not observed between the two Na groups. The population ratio and the Na and Al differences between the two groups are also comparable with those observed in metal-rich GCs. The only plausible explanation for these chemical patterns and characteristics appears to be that the outer bulge was mostly assembled from disrupted proto-GCs in the early history of the Milky Way. 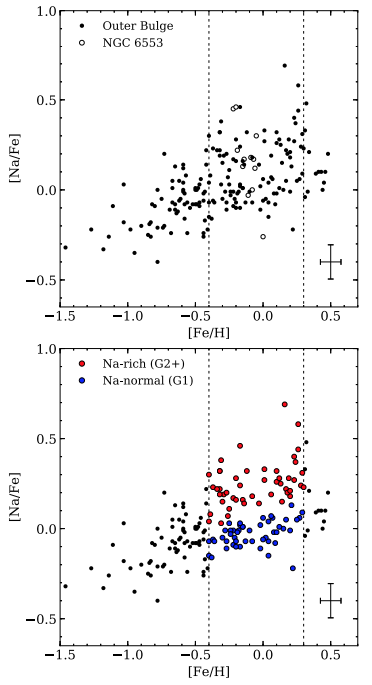 이전글
New Horizon: On the Origin of the Stellar Disk and Spheroid of Field Galaxies at z=0.7